ELKHART, Indiana — Firefighters anywhere will tell you, minutes can make a big difference when responding to a call. Especially when it’s a matter of life of death. With that in mind, the Elkhart Fire Department and Dispatch Center are installing a new station alerting system that could shave off a minute or more of response time.

Until now, dispatchers have dispatched a call to the fire department as they always have. The dispatcher receives a call about an emergency, once the call is completed the dispatcher then alerts the stations nearest the scene.

But that will soon change with a new automated system being installed.

“Just through key strokes, the system will automatically know which station that needs to send an alert to and then those units will be dispatched using an automated computer voice, such as Siri, to notify the units of the call that they have,” said Adam Amsden with the 911 Dispatch Center.

“While they are getting the information from the caller on 911, they can push a button and we will be getting a call at the same time as the caller is giving information, so that increase our response time,” said Elkhart Fire Assistant Chief Steve Kamp. 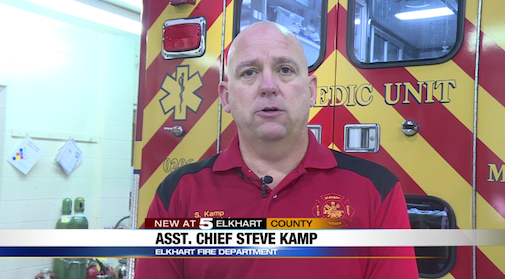 It is expected that the new system could reduce the response time for firefighters anywhere from 25 seconds to a minute or more depending on the length of the call made by someone and the details they are providing.

“The way that fire grows so fast– in the fire part of it– a minute means everything, getting there, that much quicker, being able to save property and lives,” said Kamp.

“It still is 100-percent dependent on the dispatcher, so we are not taking dispatcher jobs away by any means but as fast as they can type the information into the computer, it gets sent out to the apparatus that are responding,” said Amsden.

Work to install the new automated equipment at all seven Elkhart fire stations, as well as the dispatch center, is expected to wrap up within the next three weeks.

A new feature for alerting firefighters during the night– new lighting will flash and alert tones in the bunkroom will gradually rise in volume.